Gong Zhu has gradually become a part of the 'princess club.' She is very into dresses, shoes (even if they are not glass slippers), anything pretty pink or purple, fancy dancing and, of course, princesses. The first sign was only hours after we were united with her, when she dug out of a suitcase the few pretty dresses we had brought to China for her and insisted on changing into them. It culminated after she found "Cinderella" in one of our storybooks and wanted us to read it to her. Soon after was the Disney movie of the same; then one of the sequels. 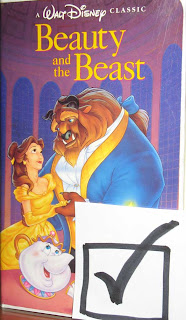 For a couple weeks after it was a rarity if I was not asked to answer to "Cinderella;" call her "Anastasia;" her brother, "Drizella;" and poor Mama, not step-mother but "mean stepmother." We were not going to the grocery store or our friends house, we were going to the "ball." Frequently, failing someone to play the role of fairy godmother, I was only permitted to go after some negotiation.

The above summary goes to explain how we came to watch "Beauty and the Beast" (Disney), not to traumatize our daughter, but at her confident request. Watch, mind you, with remote at the ready, one finger on "fast forward," another on "stop." The film has a number of suspens . . . OK, OK, scary parts. Gong Zhu snuggled in close to Mama during the first several scary scenes, with little whimpers, but could not look away. After a while, at the first sign of animated danger, she would just begin to ask what was going to happen, and how we knew — to be quite sure it would end up all right. She seemed OK with it all, and wanted keep watching.

By the time we reached the happy ending she seemed quite relaxed. She immediately pronounced her verdict in a calm, sweet, sing-song voice very out-of-place for this girl who forcefully speaks her mind when she's emotional: "Mommy, . . . I never want to see that again."
Posted by Baba at 9:16 AM 2 comments:

Baba
I'm Sponge & Gong Zhu's's dada and my wife's husband. We all live in Wisconsin, where we were raised and have spent most of our lives. I am in my early 40's and a teacher by trade, but I quit teaching by choice to be a stay-at-home dad. (Now I am teaching again part-time.) Sponge (9) is our biological son, and Gong Zhu (7) joined our family in 2007, when we adopted her in her home city, Guangzhou, China. For this blog, their names have been changed to protect the innocent … and them as well. 'Sponge' is bright & has a good memory (especially for SpongeBob & "Phineas & Ferb" quotes.) 'Gong Zhu' (princess in Mandarin) is bright (as you must be to someday rule the kingdom) and loves all things "princess".