Our Cat Eats Corn on the Cob 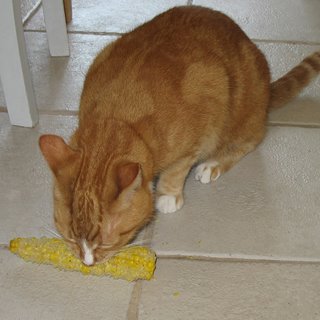 Our cat eats corn on the cob. Simple and to the point. Some set-up or fluke? Well, there is butter on it, but he was not just licking the butter off. (Our other cat was doing that, trying to figure out what the corn-eating cat was after.) No, the cat was chewing the kernels off and eating them.

We left the room, not having cleared the table, and returned to find the cat had stolen the cob and had taken it down to the floor for consumption.

Actually, knowing this cat, I wasn't that surprised. Before we got him, I thought cats ate meat (including fish and seafood) and drank milk and water. Period. (Garfield and his lasagna notwithstanding; he is, after all, a cartoon cat.)

Our corn-eating cat's favorite food is shrimp. He can smell it frozen at 50 yards and goes so wild for it that he'll catch a little piece in his mouth like a dog. His broader set of food preferences, though, are somewhat diverse and strange. Like his cartoon counterpart, he likes pasta, though he prefers it plain. If you drop a piece of spaghetti near him he'll eat it, but he backs away first then paws it, to make sure it's dead.

If we break out the canteloupe he'll start meowing and meowing — not quite the shrimp meow — but persistent. He'll eat several small pieces at a time. If denied and a rind is left accessible, he'll dig it out and eat whatever "meat" he can scrape off of it.

He's not quite as agressive about cucumber, but he will ask. Again, if peelings are around he sample them.

We've learned not to leave bread or buns out. He'll just claw a little hole in the bag and just have a little snack, making a 2-inch crater in the crust, but usually managing to render at least 3 pieces inedible.

He can't be the only feline who has odd cravings. What cats (or other pets) do you know with unusual appetites?
Posted by Baba at 8:28 PM 3 comments: 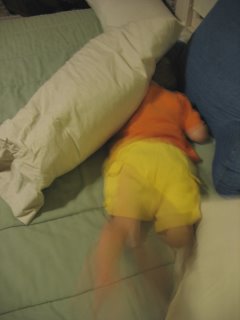 The other day Mrs. OccupationDad was trying to get Benjamin down for a nap. She read him a story and then had him lie down, staying with him. He was kind of antsy, wiggling around and talking. My wife told him that he should try to close his eyes and rest.

He responded by saying, "No, you have to get me to sleep like Dada does it."

"Oh," my wife answered calmly, "What does Dada do?"

Then my son slandered me, "He yells at me."

You will allow me to defend myself, yes? I do not yell at my son. If I did, I would have to be pretty dense to do it at naptime. I stay with Benjamin until he falls asleep. Most of the time he just lies quietly and eventually falls asleep; he such a good little guy. Sometimes he needs to snuggle or bury himself under a mountain of pillows or something. Sometimes I doze off before he does. Occasionally, he will be all restless and he'll be playing with something on the bed, while I'm there falling asleep. Whether my catnap is intentional or not, when Benjamin's flopping on the bed, or digging his feet into my side, I wake up and crankily whisper, "Please just try to lie still" or "I can't make you sleep, but it's not time to play." But even this crabby-Dada scenario is fairly rare.

Now back to the story. My wife knows I don't yell, so she asked our son, incredulously, "Dad yells at you?"

Baba
I'm Sponge & Gong Zhu's's dada and my wife's husband. We all live in Wisconsin, where we were raised and have spent most of our lives. I am in my early 40's and a teacher by trade, but I quit teaching by choice to be a stay-at-home dad. (Now I am teaching again part-time.) Sponge (9) is our biological son, and Gong Zhu (7) joined our family in 2007, when we adopted her in her home city, Guangzhou, China. For this blog, their names have been changed to protect the innocent … and them as well. 'Sponge' is bright & has a good memory (especially for SpongeBob & "Phineas & Ferb" quotes.) 'Gong Zhu' (princess in Mandarin) is bright (as you must be to someday rule the kingdom) and loves all things "princess".